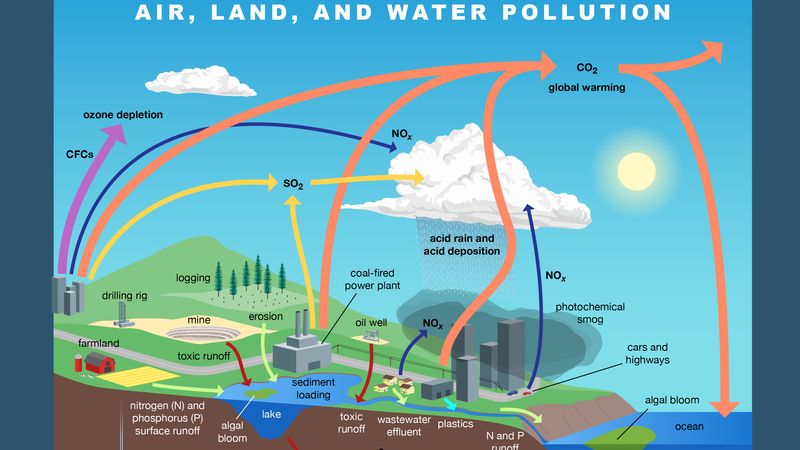 Pollution is a term used to describe the introduction of harmful substances into the natural environment, or “pollutants.” Pollutants can be foreign substances or naturally occurring contaminants. Pollution can cause negative changes in human health, the environment, and marine life. Luckily, there are various ways to combat pollution.

Pollution from industrial and commercial activities is a serious concern for our environment. The burning of fossil fuels releases harmful gases into the atmosphere. These gases combine with water droplets and fall as acid rain, causing considerable damage to plants, animals, and humans. Acid rain also adversely affects marine life. It causes eutrophication, a condition whereby pollutants from the air combine with water to form green algae.

Oil leaks from storage tanks are another common source of pollution. Aboveground storage tanks are common in oil handling facilities, and leaks from them can cause contamination of the surrounding water. To avoid spills, oil-handling facilities must comply with API Standard 653, which requires visual inspection of the tanks. However, the inspection process can be expensive. Another source of leaks in oil and gas operations are buried pipelines within the refinery’s boundaries. In some cases, these leaks can lead to much greater contamination of the surrounding groundwater than oil storage tanks.

Some of the main sources of air pollution include motor vehicles and coal combustion. They also include industrial processes, such as incinerating garbage, wood, and solid waste.

Impacts of pollution on human health

The effects of air pollution are vast, affecting many different parts and systems of the body. For instance, prolonged exposure to air pollution has been associated with an increased risk of developing cardiovascular disease and premature death. It also affects reproduction and can lead to birth defects. It is particularly harmful to children.

Studies of air pollution have also shown that higher concentrations of pollutants like nitrogen dioxide and black carbon are associated with an increased risk of cardiovascular diseases, coronary heart disease, and heart surgery. Although these findings are not conclusive, they are still consistent. While air pollution is a serious health risk for all of us, the effects on vulnerable populations are greater than for healthy adults.

Exposure to air pollution is associated with an increased risk of respiratory diseases, including asthma. According to Health Canada, there are 15,300 premature deaths in Canada each year due to above-ground air pollution. This includes 6,600 premature deaths in Ontario, 4,000 in Quebec, and 1,900 in British Columbia and Alberta. Exposure to air pollution also causes about 35 million days of acute respiratory symptoms. These health impacts cost Canada $120 billion each year, which is about 6% of its GDP.

Control measures for pollution involve social decisions that can minimize the adverse effects of pollution. These measures include the introduction of unleaded fuel, the use of low-smoke lubricants for two-stroke engine vehicles, and tighter standards for vehicle emissions. These measures also include curbing the burning of garbage, which is a major source of pollution.

Control measures for pollution are necessary to reduce air pollution and associated health risks. The burden of disease resulting from exposure to these pollutants is substantial. Investments in research are necessary to develop effective control strategies. Furthermore, the cost-effectiveness of pollution control measures will differ between countries. For instance, solutions that are effective in industrial countries may not be as effective in developing countries. It is essential to conduct research to determine the effects of these measures in different environments.

To help protect the environment from pollution, the City of Minot is taking steps to educate its citizens and city staff on how to reduce water pollution impacts. It is also educating employees about how to keep the wastewater treatment plant and storm water system running smoothly. It also trains staff about proper chemical disposal.

Impacts of pollution on marine life

Pollution affects marine life in many ways, affecting coral reefs, seagrasses, and other ocean organisms. Over-pollution can cause algal blooms, which overrun an ecosystem and deplete oxygen. This creates dead zones, which are unfit for marine life. In response, fish migrate out of these areas.

Plastic trash is a major problem, entangling and injuring marine life. It also permeates seabird feathers, which can prevent them from feeding their young or flying. The pollution of the oceans has also been linked to cancer in some marine animals. Microplastics are smaller than five millimeters in diameter, and they’re often found in the bodies of whales and other marine animals.

The impacts of pollution on marine life are a global problem. Environmentalists estimate that approximately 80% of the chemical pollution in the oceans originates from human activities. While much attention is focused on end-of-pipe discharges, diffuse emissions of toxic chemicals can have significant consequences on marine ecosystems. Key areas of concern include industrial releases of dioxins and PCBs, historical industrial pollutants re-released by dredging, and pesticides and pharmaceutical residues that remain in the seas.